Sumatriptan is a generic name for a prescription drug that is used for the treatment of migraine headaches. It is most effective when it is taken as soon as the headache pain begins – not before, even if there are warning signs like aura (sensory or visual disturbances). It’s for migraine with or without aura.  It works by narrowing blood vessels in the brain stem and reducing factors that can trigger nausea, light sensitivity, and other migraine symptoms. FDA first approved sumatriptan in 1992. 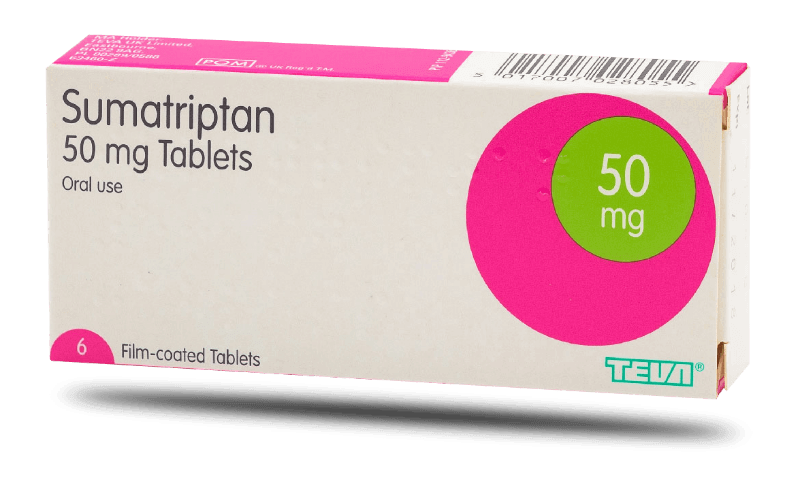 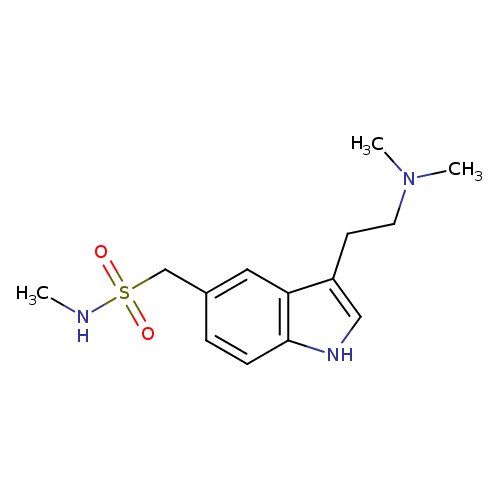 This compound belongs to the class of chemical entities known as tryptamines and derivatives. These are compounds containing the tryptamine backbone, which is structurally characterized by an indole ring substituted at the 3-position by an ethanamine.

Why is sumatriptan prescribed?

It is used to treat the migraine headache. It is especially effective in treating migraine aura symptoms such as wavy lines, flashing lights, and dark spots. It is also used for treating cluster headaches. 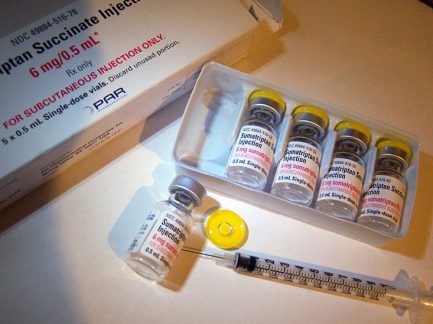 What are sumatriptan FDA approved indications?

It is used for the treatment of the migraine headache and cluster headache.

How does Sumatriptan work in the body?

It binds to 5-HT1B/1D receptors. It exerts its therapeutic effects in treating migraine headache by the agonist effects at 5-HT1B/1D receptors. These receptors are present on sensory nerves of the trigeminal system and intracranial blood vessels. It results in the constriction of cranial vessel and inhibition of the release of the pro-inflammatory neuropeptide.

It has no significant affinity or pharmacological activity at 5-HT2, 5-HT3 receptor subtypes or at alpha1-, alpha2-, or beta-adrenergic; dopamine1; dopamine2; muscarinic; or benzodiazepine receptors.

How must Sumatriptan be taken?

You must use Sumatriptan as per directions given by your doctor. You must check the label for exact instructions of dosing.

Adult Dose for the Migraine

If the response to the first dosage occurs then the second dose can be taken at least 2 hours after the first dose if required. Higher Oral doses of 100 and 50 mg may provide a greater effect than 25 mg.

Subcutaneous– The Initial dose is 1 – 6 mg subcutaneously only once

If the response to the first dosage occurs, then the second dose can be taken at least 1 hour after the first dose if required.

You must take 5 and 20 mg dosage as a single spray in one nostril. The10 mg dosage can be taken as 5 mg into each nostril. If the response to the first dosage occurs, then the second dose may be taken at least two hours after the first dose if required.

Nasal capsule/powder: Initial dose: 11 mg can be taken into each nostril once
Maximum dose: 2 doses (44 mg/4 nosepieces) in a day.
If the symptoms are not resolved in 2 hours or return then the second dose may be taken at least 2 hours after first dose.

Special Precautions:
-The treatment must be started at signs of the migraine headache, or other associated symptoms like vomiting, nausea, and photophobia.
-The higher doses have a greater effect, but carry a greater risk of adverse reactions.
-The efficiency of the treatment of more than four headaches in a day has not been established.

It is used for the treatment of the migraine with or without aura.

Adult dose for the Cluster Headache

Subcutaneous injection- Initial dose: 6 mg subcutaneously, once in a day.

If symptoms recur, the dose can be repeated at least an hour after the first dose.

Special Precaution:
-The treatment must be started at the sign of the cluster headache or associated symptoms like vomiting, nausea and photophobia.
-The efficiency of the treatment of more than four headaches in a day has not been established.

In Mild to moderate liver dysfunction
Oral tablets: The Maximum single dose must not be exceeded beyond 50 mg.
Subcutaneous injection: No adjustment required

Severe liver dysfunction: it is contraindicated

For Elderly
It must start at the lower dose due to greater frequency of renal, hepatic and cardiac impairment.

What happens if a dose of sumatriptan is missed?

If you think you have taken too much sumatriptan, call your doctor right away or go to the closest emergency room.

Various side effects are as follows:

You must tell your doctor if you are facing any of the following medical conditions.

For how long Sumatriptan stay in the body?

Can Sumatriptan be used in pregnancy?

Can Sumatriptan be used in nursing mothers?

It gets excreted in human milk. Avoid breastfeeding till twelve hours of the administering of Sumatriptan. The infant exposure can be minimized by avoiding breastfeeding for 12 hours after treatment with Sumatriptan tablets.

Can Sumatriptan be used in pediatric?

The safety and effectiveness in pediatric patients have not been established. These tablets are not advised to patients having less than 18 years of age. The analysis for nasal spray (5 to 20 mg) was carried on 1,248 adolescent having the migraine of age 12 to 17 years. The trials were not able to establish the efficacy of Sumatriptan nasal spray.

The various documents in post marketing ha stated various adverse reactions in the pediatric population. It was seen after the administration of Sumatriptan through intranasal, subcutaneous, and oral route. The loss of vision, stroke, myocardial infarction and even death was also reported.

Can Sumatriptan be used in old patients?

The Clinical trials of Sumatriptan tablets were not having sufficient numbers of patients of age 65 and older. The administration of Sumatriptan for an elderly patient must be cautious. The dose must be started at the low dose.

The patient must be under observation in the case of decreased renal, hepatic, or cardiac function. It is advised for the evaluation of heart in the old patient. Also, the patients who are at the risk of smoking, hypertension, diabetes, and the family history of CAD before the administration of Sumatriptan.

Can Sumatriptan be used in patients with hepatic impairment?

Can Sumatriptan cause Ischemia, Prinzmetal’s Angina and Myocardial Infarction?

The administration of Sumatriptan tablets is contraindicated in patients suffering from vasospastic CAD or ischemic. There also have been reports of serious cardiac reactions that include myocardial infarction. It can occur within few hours after the administration of Sumatriptan tablets. Some of the adverse reaction were seen in patients without CAD.  This drug can cause Prinzmetal’s angina. It occurs in the patients without a history of CAD.

Can Sumatriptan cause arrhythmias?

Many life-threatening disturbances like ventricular tachycardia and fibrillation can lead to death. These have been reported after a few hours of the administration of Sumatriptan. You must discontinue Sumatriptan if these symptoms occur. These tablets are contraindicated in patients suffering from arrhythmias or Wolff-Parkinson-White syndrome.

Can Sumatriptan cause angina?

Heaviness in the precordium, sensations of tightness, pressure, pain in throat, neck, and jaw occur after taking Sumatriptan tablets. You must go for an ECG if the patients are at high cardiac risk. The administration of Sumatriptan is contraindicated in patients suffering from Prinzmetal’s variant angina and CAD.

Can Sumatriptan cause cerebrovascular events?

Can Sumatriptan cause vasospasm reactions?

Sumatriptan may cause non-coronary vasospastic reactions like gastrointestinal vascular ischemia, peripheral vascular ischemia, splenic infarction, and Raynaud’s syndrome. The patients who have the signs of non-coronary vasospasm reaction after the use of Sumatriptan that rules out the vasospastic reaction. The report of permanent blindness or partial vision loss is reported after the use of Sumatriptan.

Can Sumatriptan cause serotonin syndrome?

The serotonin syndrome can occur while taking Sumatriptan with SSRIs, serotonin norepinephrine reuptake inhibitors, MAO inhibitors and tricyclic antidepressants. The symptoms are changes in mental status like hallucinations, agitation, and coma. It can also cause autonomic instability like tachycardia and hyperthermia.

You can also face neuromuscular problems like coordination and hyperreflexia. The gastrointestinal problems like nausea, vomiting and diarrhea. The onset of symptoms occurs within minutes of receiving Sumatriptan.  You must discontinue this medicine in the case of Serotonin syndrome.

Can Sumatriptan cause increase in blood pressure?

Can Sumatriptan cause anaphylactic reactions?

Can Sumatriptan cause seizures?

Can Sumatriptan can be taken with Duloxetine?

The co-administration of Sumatriptan and Duloxetine can increase the risk of serotonin syndrome. It is a rare yet serious fatal condition that can be trigger from hyper stimulation of 5-HT1A and 2A receptors. The symptoms of the serotonin syndrome are changes in mental status like irritability, confusion, altered consciousness, coma and hallucination.

It also results in autonomic dysfunction like hyperthermia, tachycardia, shivering, and blood pressure. Neuromuscular issues like tremor, rigidity, and ataxia. Gastro-intestinal issues like nausea, abdominal cramping, vomiting, and diarrhea. It can be managed by avoiding the use of multiple serotonergic agents together.  The patient must be monitored for symptoms of serotonin syndrome.

Particularly the caution must be taken while increasing the dose of these agents. If the serotonin syndrome gets developed or is suspected all serotonergic agents must be discontinued immediately.

Can Sumatriptan can be taken with Tramadol?

The patient must be closely under monitor when the doses are changed. You must take these both two doctors under the doctor’s guidance. If the serotonin syndrome is expected or gets develop, you must discontinue these both two drugs immediately. The serious cases must be managed under toxicologist.

Can Sumatriptan can be taken with Trazodone?

The other symptoms are diarrhea, nausea, stomach cramp, and vomiting. The serious cases may result in death or coma. You must seek the advice of the doctor if you experience these symptoms.

Can Sumatriptan can be taken with Ondansetron?

Can Sumatriptan can be taken with Sertraline?