What is uvula? What does uvula do in our body?

Uvula or the palatine uvula is muscle part of tissue that hangs down over the tongue toward the back of the mouth. It is anatomical part of soft palate that helps in pushing food towards throat. It is made of muscle and glandular tissue (racemose glands and serous glands) but also with canals that excrete saliva.

During swallowing, uvula move together with soft palate to close the nasopharynx, preventing food from getting into the nasal cavity. Additionally uvula produces large amounts of thin saliva that serves as a throat lubricant. It has also important function in speech. In different languages, the uvula is used for articulating a series of consonant sounds, called uvular consonants.

The voiced uvular trill is one example that is commonly used in French, Arabic and Hebrew languages. Moreover, only in mammals uvula produces such amounts saliva indicating that it may serve as an accessory speech organ. 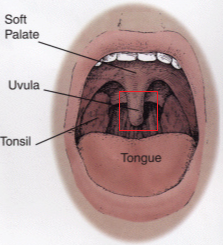 Uvula stimulation may activate the reflex of gag. This is often a problem for people with uvula piercings. It is also known as a common technique for inducing vomiting.

The uvula may be responsible for snoring by causing vibrations or for having problems with breathing during sleep. In some cases uvula defects may lead to sleep apnea, which can be managed by the uvula or its part removal by a surgery known as uvulopalatopharyngoplasty (UPPP, or UP3).

In some cases this surgery may also lead to reoccurrence of sleep apnea if scar tissue is formed and the velopharynx airspace is shrank. The success of this procedure for sleep apnea is approximately considered to be 40–60% effective in reducing symptoms.

In not so common cases, the uvula can’t be closed appropriately against the back of the throat, which may lead to the condition known as velopharyngeal insufficiency -VPI. This may predispose “nasal” speech, where additional air comes down the nose, and the speaker is unable to say certain voices, such as pronouncing ‘b’ like ‘m’.

When we are swallowing food/drink, the uvula and soft palate work together and move to close off the nasopharynx, thus preventing the food from entering the nasal cavity. If this process fails, nasal regurgitation may occur.

This can be commonly seen in patients with velopharyngeal insufficiency or in the cases of myositides, and neuromuscular disease. This may also happen during intensive coughing or during accidental inhalation of water because coughing may prevent the uvula from blocking the nasopharynx, thus liquid may be expelled through the nose.

If the inflammation of uvula occurs, it will become swollen, red, painful, itching, burned, with swallowing difficulties. In that case, uvula can expand 3–5 times its normal size which may cause issues with breathing, eating and talking. Although, uvulitis is not considered as a serious or life-threatening condition it can be very uncomfortable.

A swollen uvula may also be caused by following conditions:

Throat infections may cause uvulitis. These infections can be both bacterial and viral, and may include:

Common viral infections that may cause uvulitis are:

The most common bacterial infection that may cause swollen uvula is strep throat, which occurs due to Streptococcus pyogenes infection which is a type of group A Streptococcus.

Swollen uvula is also common in patients with tonsillitis.

Epiglottitis is uncommon but very dangerous condition that may occur in children. It is caused by an infection that causes an inflammation of epiglottis and surrounding structures, and can progressively lead to severe breathing problems.

Acid reflux may also cause uvulitis. Different GIT conditions such as chronic gastritis, gastroesophageal reflux disease (GERD) or Zoolinger-Ellison diseases may cause the stomach acid being thrown back into the esophagus reaching the mouth and uvula and provoking irritation and swelling.

HANE is uncommon genetic disorder caused by a gene mutation. The condition is represent with swelling attacks that may also involve the uvula. Most people with this disorder experience their first attack during childhood.

Injured uvula may become swollen however uvula injuries are not very common. Though, it is possible to burn the uvula with hot food, and the uvula can also be injured as the result of some medical procedures, such as intubation. However, complications from intubation are rare.

Certain genetic conditions may cause uvula abnormalities. Congenital condition called Cleft lip/palate may cause absent of the uvula or other abnormalities. Some people can be born with elongated uvula. If symptoms are troublesome, the uvula may have to be surgically removed.

Other causes may include: 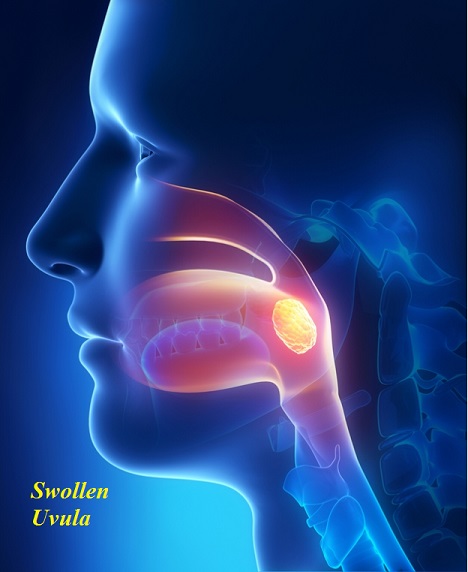 Can swollen uvula be caused by medication treatment?

According to the reports drugs such as: NSAIDs or nonsteroidal anti-inflammatory drugs (ketorolac, diclofenac, nimesulid, etc), angiotensin-converting enzyme (ACE) inhibitors (enalapril, quinapril,etc) and angiotensin II receptor antagonists (valsartan, irbesartan,valsartan, etc) can cause uvulitis as a side effects. Uvulitis has also been related with the abuse of cannabis and cocaine and the topical administration of Ecballium elaterium herbal remedies used in the treatment of sinusitis and rhinitis.

Uvulitis signs and symptoms may include:

Clinical features and physical examination are very important in diagnosing uvulitis. Swollen uvula is most commonly presented with: sore throat, difficulty in swallowing and with sensations of feeling that something is in the throat. Different causes may provoke different symptoms, so the patient might or might not have a fever or tendency to gag, spit or choke because of severe discomfort while engulfing saliva.

Blood test is always recommendable in order to confirm infection. Increase counts of white blood cells are a good indicator of the present infection.

The throat or uvula culture is also recommended in order to find the exact cause of infection and will be helpful to decide which microorganism is responsible for uvulitis. A cotton swab is wiped onto the uvula and sample is examined in the lab to identity the bacteria.

In some cases, X-ray scans may be good alternative especially in the case of severe scenarios when the patient is having severe issues with swallowing and sensations of chokeing. In such cases X-ray of neck is effective diagnostic method.

How long does swollen uvula last?

If treated on time or if it is not caused by serious underlying problem it is possible to stop the pain within 1-2 weeks after seeing a doctor and getting diagnosed.

If swollen uvula is caused by mild condition for example common cold, swelling can be usually healed without any treatment. On the other hand, treatment will depend on the severity of symptoms, and inflammation causes.

Patients should always take all the medications as prescribed, and should not stop taking them on their own even after infection is healed.

Antihistamines (loratadine, desloratadine, cetirizine, etc) or corticosteroids (prednisolone, dexamethasone, etc) can be prescribed if uvulitis is caused by allergy. In cases of severe allergy such as anaphylaxis, epinephrine shot should be given in emergency cases.

Following medicines can be prescribed in order to treat angioedema:

If you have swollen uvula follow next steps for better relief:

When to seek medical attention in the case of swollen uvula?

Surgical removal of uvula or uvulopalatopharyngoplasty can be done in extreme cases such as cancer. If uvula is removed partly, there are chances of it reoccurrence.

Honey and garlic for swollen uvula

Honey is a good remedy for swollen uvula. A teaspoon of honey licked twice a day is considered good for uvulitis. Many herbalists recommend honey because it helps in neutralizing toxicity.

Garlic contains allicin which is a powerful antimicrobial agent that can be beneficial for swollen uvula treatment. The best way is to take raw garlic. Take a few garlics, crush them and leave to stand for 15 minutes to allow the allicin to form. Mix crushed garlic with some honey for best effects.

Turmeric and ginger for swollen uvula

For many years, the benefits of drinking basil tea have been proven. Simply place the basil in the hot water and try and drink 2-3 cups daily. It will reduce soreness and inflammation.

Belladonna and wormwood are homeopathic remedies that can be helpful in the case of uvulitis. However, there are risks of consuming this remedy, so it’s absolutely essential to speak with a herbalist before consuming.