TEVA 834 is an imprint on a pill identified as white in a round shape. The pill contains clonazepam as an active ingredient in the dose of 2 mg. Clonazepam is an anticonvulsant benzodiazepine drug. It is supplied by Teva Pharmaceuticals USA.

An active ingredient of TEVA 834 pill is clonazepam. Clonazepam is a benzodiazepine drug. It affects brain chemicals that may be unbalanced. Clonazepam is also an anti-seizure or anti-epileptic drug, usually prescribed for absence seizures or Lennox-Gastaut syndrome in adults and children. It also used to treat panic disorder (including agoraphobia) in adults.

It appears as an off-white to a light yellow crystalline powder of a faint odor with a solubility in water of <100 mg/L at 25 deg. 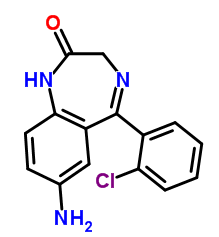 Drug class: Clonazepam belongs to the class of organic molecules known as 1,4-benzodiazepines which contains a benzene ring fused to a 1,4-azepine. 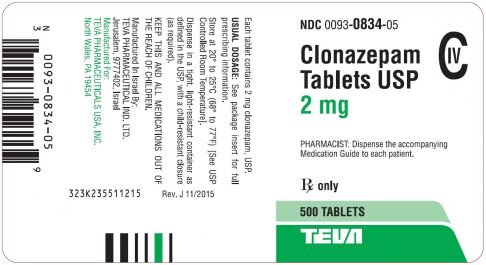 Under the Controlled Substance Act (CSA) clonazepam is a Schedule 4 drug which means that the medicine has a low potential for abuse relative to the drugs in Schedule 3 and abuse of the drug may lead to limited physical dependence or psychological dependence.

Clonazepam produces allosteric interactions between CNS benzodiazepine receptors and GABA receptors and potentiate the effects of GABA. As GABA is an inhibitory neurotransmitter in the brain, the result is increased inhibition of the ascending reticular activating system. In this way, clonazepam blocks the cortical and limbic arousal following stimulation of the reticular pathways.

Metabolism and excretion. TEVA 834 pills have extensive metabolism, with less than 2% of unchanged clonazepam being excreted in the urine. Biotransformation occurs predominantly within the reduction of the 7-nitro group to the 4-amino derivative which is then acetylated, hydroxylated and glucuronidated. CYP-450 including CYP3A, may play an important role in metabolic reactions of clonazepam reduction and oxidation.

The elimination half-life time of this drug is typically 30 to 40 hours. Pharmacokinetics are dose-independent within the dosing range. There is no evidence that TEVA 834 pill induces its own metabolism or that of other drugs in humans.

TEVA 834 pill use during pregnancy and breastfeeding

TEVA 834 pills should not be used during pregnancy unless the benefit outweighs the risk. It is classified in a D category by the US FDA pregnancy list of drugs meaning that child born to a mother taking this drug may be at risk for withdrawal symptoms. A mother should be warned of the potential risks to the fetus and counseled to discontinue the drug prior to becoming pregnant.

Studies showed the risks of neonatal flaccidity, hypothermia and respiratory and feeding difficulties in children born to mothers who have been taking this drug late in pregnancy.

Clonazepam may be excreted into milk and occasionally may provoke sedation in breastfed infants, especially when given with other CNS depressants. An infant should be monitored for drowsiness, adequate weight gain, and developmental milestones.

Clonazepam may cause following side effects:

How long TEVA 834 pill stays in the system?

To determine how long TEVA 834 pill will remain in the body after the last dose, it is necessary to consider the elimination half-life of clonazepam.  Clonazepam has a long elimination half-life time in the range of 30 to 40 hours, meaning that it will take about 1 and 2 days just to eliminate 50% of the drug from the body. According to some estimations 6.88 to 9.17 days are needed after the final dose.

Other data suggest that clonazepam may also have a wider-ranging half-life of 18.7 hours to 60 hours.  If this is the case, it could take between 4.29 and 13.75 days for complete TEVA 834 pill excretion.

TEVA 834 pill is contraindicated in patients with the following conditions:

Following precautions should be made: