What is Xylitol nasal spray?

The main ingredient of Xlear nasal spray is Xylitol that has a 5-carbon structure which makes it different from other sugar molecules. Xylitol is of prime importance ingredient in the spray because it does not allow bacteria to adhere to the nasal tissues and help you to wash out the harmful bacteria from the nose. It also interferes with the bacteria to form biofilm and making the bacteria more susceptible to antibiotics and body’s natural defense system.

Is xylitol a sugar?

Xylitol is a sugar alcohol. It is a natural product that can be obtained from xylose which is also known as wood sugar.

Xylitol and importance for the nose

The problem mainly arises from the nose, which is the nest for the harmful bacteria. The bacteria then moves into the ear canal and cause infection there. Cleaning the nose helps to remove irritants that cause infections, allergies, and asthma. A Xylitol nasal spray decreases the incidence of ear infection (otitis media) by reducing the bacterial colonization and allergenic pollution.

Xylitol spray is one effective product that possesses many significant benefits including clearing the nasal passages. It acts as a natural defense against nasal and ear infections. Xylitol is beneficial in reducing the germs, and pollutants from sticking to the nose tissue.

Regular use of nasal spray showed many health benefits such as reducing nasal infections and improved breathing. The daily defensive washing of nose is very necessary which can be carried out by using xylitol nasal spray. Concentrated xylitol stimulates the washing of the nose.

Researches shown that the defense system of our noses is carried out by the sufficient amount of water that is carried by air we breathe. Xylitol works to optimize our nasal defense by pulling the small amounts of water into the nose. Thus, Xylitol enhances our own washing defense with everyday use thereby reducing the incidence of respiratory and ear infections.

Xylitol nasal spray is a new concept as it provides safe and reasonable option for nasal and ear infection.

Xylitol mainly works by interfering with the bacteria and making it unable to stick to the body tissues. It has a unique effect of reducing the bacteria’s ability to produce biofilm thereby making the bacteria more susceptible to antibiotic. There are several uses of xylitol nasal spray.

The prime and most important use of Xylitol in the nasal spray is clearing of nasal passages. The infectious germs, bacteria, pollutants, and allergens adhere to the mucus membrane of the nasal tissues and cause infections and diseases. Xylitol reduces the capability of the infectious germs to stick to the nasal pathway and preventing them from causing infections.

Regular use of xylitol nasal sprays facilitates our own defensive washing of the nose, which results in fewer respiratory infections, and easier breathing. Also, Xylitol decreases the concentration of salt in the fluid of airway surface which makes the action of antibiotic to be more effective.

Xylitol is proved effective in reducing the adherence of bacteria to the nasal tissues and is shown by: 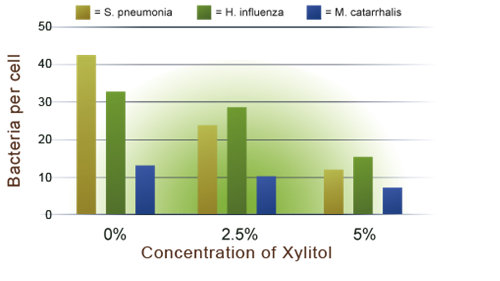 The root cause of ear infections is bacteria Streptococcus pneumoniae, and Xylitol causes damage to the streptococcus bacteria by weakening it thereby preventing its growth. Also, Xylitol reduces the adherence of S. pneumonia and H. influenza to nasopharyngeal cells. This is the reason; Xylitol is proved effective in preventing ear infections. It is also helpful in treating sinus infections because the same bacteria are involved.

Evidence showed that the prophylactic administration of xylitol can reduce the occurrence of Acute Otitis Media (AOM). It has also been showen that 8 grams of Xylitol administered orally prevented 40% of ear infections.

Xylitol causes the bacteria to wash out easily by decreasing the hold of bacteria onto the body tissues. A very less dose of nasal xylitol (as compared to oral dose) was tested in children with chronic ear infections and results showed the 90% reduction in the infection with xylitol nasal spray. 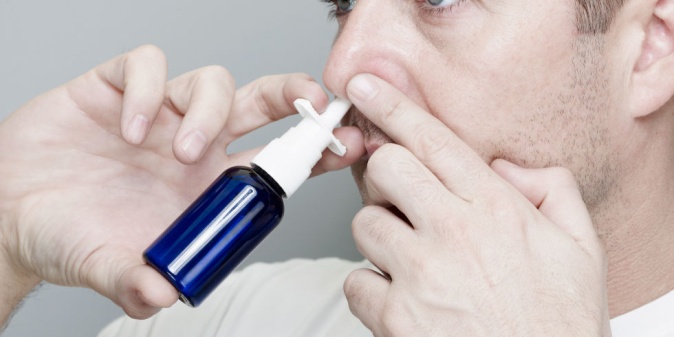 How Nasal Xylitol Works on Infections?

In a cross over study, xylitol sprayed for 4 days in normal volunteers, it showed inhibition and reduced number of nasal coagulase negative staphylococcus as compared with saline control.

Effect of Xylitol administration to nasal mucosa on coagulase-negative staphylococcus. Xylitol vs. Saline

Xylitol can prevent airway infections, as it may be beneficial in reducing the ASL salt concentration and enhancing the antimicrobial defense at airway surface. Several reasons are there which increases the possibility of  xylitol for treating infections:

Therefore, infection when established once, infection and inflammation change the airway structure that can even cause serious airway infection such as chronic bronchiectasis, that can lead to a difficult therapeutic challenge.

How nasal Xylitol works on allergies?

Xylitol is a five-carbon sugar that has promising efficacy against chronic infections. Xylitol is one of the best and well tolerated sinonasal irrigant as 5%w/v formulation when mixed with water. In a study, Xylitol was compared with normal saline to detect its efficacy in allergies and sinusitis.

Normal salines can increase the salt concentration in the airway fluid and dry out the sinuses and leave burning sensations behind. Whereas Xylitol nasal solution increases the tonicity of the saline solution, It pulls extra moisture into the nasal passage which makes your nose washes more effectively without letting it dry.

Xylitol doesn’t dry and damages the nasal and sinus pathways. Xylitol nasal spray recommended more commonly by the doctors and ENT specialists, due to its effectiveness and protective properties.

Xylitol solution is a sinus rinse solution and being a hypertonic it can:

Can children use Xylitol nasal spray?

During winter and cold temperatures, one of the most common problems with babies is “chocked nose”. And if you are also wondering about how to clear a baby’s nose, Xlear nasal spray with Xylitol is the answer. As per many websites, the one and the best solution for clearing a baby’s nose is nasal saline spray. However, saline alone is not helpful in preventing sinus issues as well as ear infections in babies.

Researchers found that the Xylitol helps in preventing the attachment of bacteria to the nose. It inhibits the adherence of infection and allergy causing bacteria into the nose that may also cause ear infections. Therefore, Xylitol is now considered as a better option as compared to saline alone in removing bacteria from nasal tissues. When tested, Xylitol showed 90% success in removing infections and sinus issues in the babies.

Dr. Jones describes that a Xylitol spray is far better than only saline spray. Moreover, it is a natural saline and It also passed the test which shows Xylitol is safe for infants and toddlers. 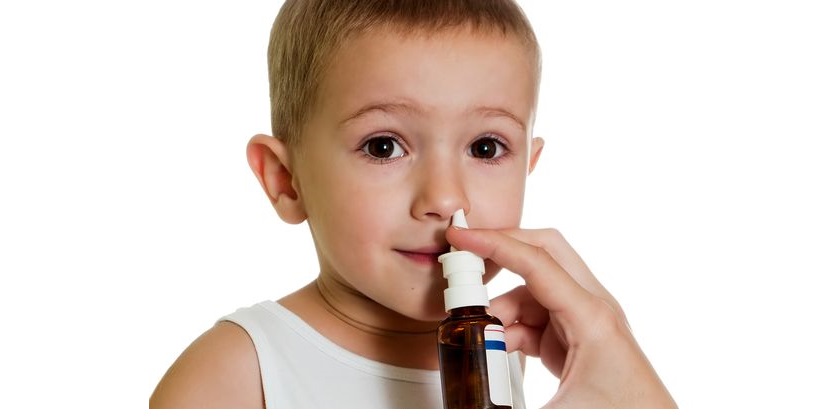 Can Xylitol nasal spray be used in pregnancy?

A women’s immune system is weakened during pregnancy and she becomes more prone to infections. Prevention is the key to avoid any kind of infection. A pregnant woman should wash her hands and should avoid contact with ill people (should not touch their eyes, mouth, and nose).

A pregnant woman who is suffering from colds, allergies and sinus infections, it becomes necessary to consult her healthcare provider regarding administration of over the counter medications. Sometimes getting relief from cold and congestion becomes problematic for her.

Many allergy and cold medications can compromise the safety of unborn babies that is why taking the over the counter medicine for cold and flu is not safe for pregnant women. As some irrigants can provide required relief for pregnant women by soothing nasal tissues but they can also cause washing away of irritants and bacteria can lead to upper respiratory infections and discomfort.

Pregnant women should use Xlear nasal spray with Xylitol in order to get relief from congestion and cold because:

A periodontal disease is a group of infections that cause the inflammation of the gingival tissues and thereby destroys periodontal tissues. In severe cases, it is accompanied by loss of alveolar bone with exfoliation of the teeth. Due to lower host immune responses, infection from subgingival plaque forming bacteria results into periodontitis.

Xylitol is widely known to possess anticaries properties. Xylitol is produced from birch, therefore it is also known as birch sugar. It is superior to other sugar alcohols due to its potency to control caries. Some of other natural resources of xylitol are plums, strawberries, raspberries, and rowanberries. Xylitol is known to inhibit Streptococcus mutans, the organism responsible for dental caries. Effect of xylitol on P.gingivalis is quite less.

Consistently using small amounts of xylitol tends to increase protective factors in saliva. Xylitol stimulates saliva flow and helps keep salivary minerals in a useful form. Prolonged xylitol use increases the buffering capacity and protective factors in saliva. Increased saliva production is especially important for people suffering from a dry mouth due to illness, aging, or drug side effects.

Since the oral environment becomes less acidic with continued xylitol use, it is advisable to chew xylitol gum or suck a xylitol mint after every meal or after eating sweet snacks. The best news is that studies have shown that xylitol’s effect is long lasting and possibly even permanent.

The root cause of ear infections is bacteria Streptococcus pneumoniae, and Xylitol cause damage to the streptococcus bacteria by weakening it thereby preventing its growth. Also, Xylitol reduces the adherence of S. pneumonia and H. influenza to nasopharyngeal cells. This is the reason; Xylitol is proved effective in preventing ear infections. It is also helpful in treating sinus infections because the same bacteria are involved.

Evidence showed that the prophylactic administration of xylitol can reduce the occurrence of Acute Otitis Media (AOM). It has also been showed that 8 grams of Xylitol administered orally prevented 40% of ear infections.

Xylitol cause the bacteria to wash out easily by decreasing the hold of bacteria onto the body tissues. A very less dose of nasal xylitol (as compared to oral dose) was tested in children with chronic ear infections and results showed the 90% reduction in the infection with xylitol nasal spray.

Bacterial colonies form a protective barrier in sufficient amount and allow the bacteria to flourish inside the protective sheath. This sheath is known as biofilms. The bacteria strengthen their resistance to antibiotics as well as to the body’s natural defense system. Antibiotics cannot penetrate these biofilms but Xylitol can. Xylitol can inhibit the biofilm structure and make the wound more susceptible to antibiotics.

In a recent study, Xylitol (20%) shown to completely inhibit the biofilm formation of Pseudomonas aruginosa, a virulent strain that is responsible for the chronic condition of the wound. It is also found to cause severe tissue damage in the diabetic foot ulcers. When treated with Xylitol, all subjects, who has been suffering from the Diabetics Mellitus, were seen to have complete healing of their wounds.

When combined with lactoferrin, Xylitol was seen to diminish the viability of P.aeruginosa films as well as increased permeability of bacterial membranes. Thus the combination of Xylitol and lactoferrin is beneficial in making bacteria more susceptible to antibiotics and body’s own natural defense system.

Xylitol nasal spray unlike all other over the counter medication for cold and flu has no significant side effect.

Common nasal sprays, which are used to provide relief from cold, flu and sinus problems, may cause some side effect due to excess usage of spray. The most common side effect of such nasal sprays is “Rebound congestion”. Many nasal sprays contain the ingredient that causes vessel constriction and after overuse of spray, the nasal passage does not respond in the same way.

The Xlear nasal spray contains Xylitol which is a natural ingredient and does not cause any vessel constriction and provides constant relief without any rebound congestion.

Therefore one can use Xlear Nasal Spray without any worries.

There are no medication contraindications to Xlear nasal spray.

Xylitol is mainly comes under the brand name of Xlear. It is also available as:

“Ooxytocin nasal spray uses, dosage, side effects, buy over the counter or prescription, reviews“
What is meperidine and what is it used for? How does meperidine work in the body?“