Amitriptyline is an antidepressant drug belonging to class Tricyclic Antidepressant. It is used for the treatment of depression and other chemical imbalances in the brain.

It was discovered in 1960 and was approved by US Food and Drug Administration in 1961. The brand name under which amitriptyline is sold is Vanattip, Elavil, etc. It is chemically known as 3-(10,11-Dihydro-5H-dibenzo[a,d]cycloheptene-5-ylidene)-N,N-dimethylpropan-1-amine.

Its generic is also available in the US market and it is also included in the WHO essential medicine list. The recommended route of administration is oral. It is available in various dosage forms i.e oral tablets, capsule, oral suspension, oral solution and transdermal gel.

The recommended dose for amitriptyline is 75 mg orally per day and has  divided doses with a maximum of 150 mg per day. The drug is basically used for the treatment of number of mental illnesses which may include depressive disorder and anxiety disorder and bipolar disorder.

Other than mental illnesses it may also be used as a preventive measure for symptoms of migraine, neuropathic pain like fibromyalgia and postherpetic neuralgia and even in insomnia.

The common side effects encountered with tricyclic antidepressant which range from minor to major are dry mouth, low blood pressure, sleepiness, constipation and some serious includes seizures , urinary retention, glaucoma, etc. The major concern about using this class of antidepressant is increasing the suicidal tendencies in an individual. 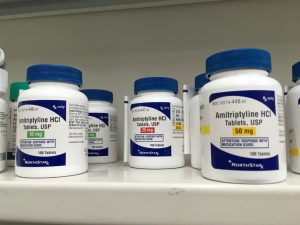 Mechanism of action of Amitriptyline

The action is thought to be by inhibiting the membrane pump mechanism responsible for uptake of norepinephrine and serotonin in adrenergic and serotonergic neurons.

The inhibition of membrane pump potentiates the neuronal activity or prolong neuronal activity since reuptake of these biogneic amines is important in transmitting activity. This interference is thought be the underlying cause for the antidepressant activity of amitriptyline.

What body  does to Amitriptyline “Pharmacokinetic”

Absorption: It is rapidly and well absorbed in the GI tract but absorption response varies considerably within individuals. The standard bioavailability for amitriptyline is 30-60% due to first pass metabolism, peak plasma concentration is attained in 2-22 hours following oral or intramuscular administration. It is highly protein bound i.e 90% or more in plasma and tissues.

Distribution:  The volume of distribution in the body is not known but it is known to be highly protein bounded in the body i.e 90% or more in plasma and tissues.

Metabolism: The drug is metabolized via hepatic metabolism with extensive first pass metabolism is primary. Amitriptyline is demethylated in the liver to its primary metabolite, nortriptyline which is the active metabolite of the drug.

When does the drug concentration reduce to half of the dose

The half life of the drug is thought to be 10 to 50 hours, with an average of 15 hours. So if you take amitriptyline 75 mg tablet it will reduce to its half within 15 hours.

What drug does to the body “pharmacodynamic”

It also exhibits strong anticholinergic activity which may include changes in heart rhythm and its conduction of impulses. An unlabeled indication of amitriptyline is in the management of chronic nonmalignant pain.

Adult dose for depression: The recommended starting dose is 75 mg orally per day in divided doses, this may be increased to a total of 150 mg per day. An alternate bed time therapy is also prescribed in the dose of 40 to 100 mg.

Dose for Geriatric patients: The dose is standard 10 mg thrice a day in conjugation with 20 mg at bed time.

Dose for Pediatric patients:It is same as Geriatric patients for age of 12 years or older i.e. 10 mg thrice a day and with 20 mg at bedtime.

How should Amitriptyline be taken

If the dosage is tablets then take drug orally by mouth. The direction should be strictly followed as described. Swallow the tablets with a drink, drink dose not mean alcohol it should be taken with water. It can be taken with or without food.

Adolescents and elderly patients over 65 years old may have stronger reaction to this medication with minimal dose requirements.

Interaction of Amitriptyline with other drugs

Being an anti depressant it may interact with large number of drugs. An interaction may range from mild to severe. As every patient is unique in its nature your doctor must know about all other medication you are taking. A short list of medicines that interacts with amitriptyline are listed below:

Amitriptyline is mainly used for mental issues like depression. A few evidences suggest that the drug is more effective than any other antidepressant, although it is not used as a first line treatment.

It may also be used as a treatment for migraine and neuropathic pain disorders, postherpetic neuralgia and bulimia (eating disorder). Off label treatment include irritable bowel syndrome.

What is the cost of Amitriptyline tablets

The cost of amitriptyline depends on the strength which you are taking and who is the manufacturer as well as whether it is sold under a brand name or as generic drug.

However, the cost  is as low as 0.3 USD  and as high as 1.50 USD per tablet. But in retail market, price depends on the retailer. Big giants like Walgreen may sell the drug for lower costs compared to the regular retailer having single shop.

Can you take Amitriptyline and levothyroxine together

Dose adjustment of levothyroxine should be done in order to get the required biological effect and to maintain the thyroid hormone levels in the body to regulate the daily activities.