Propylhexedrine (on the market known as Benzedrex and Obesin) is a synthetic stimulant drug and structural analog of methamphetamine which is widely used as a nasal decongestant for relief of the symptoms of congestion due to colds, allergies and allergic rhinitis and sometimes used recreationally as an OTC “legal high”.

In the US, propylhexedrine is most commonly found in OTC Benzedrex inhalers. Benzedrex was first manufactured by Smith, Kline and French after the Benzedrine inhaler, which contained racemic amphetamine, became unavailable following the placement of amphetamines on the US Schedule II status (highest abuse potential, yet with accepted medicinal uses). Under the trade name Obesin, propylhexedrine has also seen use in Europe as an appetite suppressant.

This slightly water-soluble compound is a clear, colorless liquid that vaporizes slowly at room temperature. The hydrochloride salt of propylhexedrine is a crystalline solid with a melting point of approximately 127 degree Celsius.

Are amphetamines and propylhexedrine similar?

Yes, there is a structural similarity between propylhexedrine and other common aromatic sympathomimetic compounds including methamphetamine and the neurotransmitter, epinephrine.

Propylhexidrine causes the norepinephrine, dopamine, and serotonin (5HT) transporters to reverse their direction of flow. This inversion leads to a release of these transmitters from the vesicles to the cytoplasm and from the cytoplasm to the synapse. It also antagonizes the action of VMAT2, causing the release of more neurotransmitters.

Propylhexedrine history of use

The Benzedrine inhaler was replaced by the Benzedrex inhaler (B.F. Ascher  &  Co., Lenexa, KS), which contained 250   mg of propylhexedrine (i.e., no amphetamine) in a combination with 12.5 mg methanol and various aromatics hydrocarbons. Some airlines (e.g., Pan American) distributed Benzedrex inhalers in the 1950s as decongestants to reduce discomfort resulting from changes in cabin pressures.

How is Propylhexedrine (Benzedrine and Benzedrex) abused?

The usual method of Benzedrine and Benzedrex abuse involved the chewing and swallowing of the amphetamine- containing cotton pledget, preferably with chewing gum to reduce the irritant properties of the base. Occasionally, the strips were soaked in beverages (i.e., coffee, alcohol) or swallowed whole.

One study of an incarcerated population in the 1940s revealed that 25% of the inmate population used the inhalant material for recreational purposes. By the mid – the 1970s, the medical literature contained reports of both oral and intravenous (IV) abuse of the propylhexedrine inhalers.

The abuse of propylhexedrine was sporadic throughout North America with cases reported from Dallas, Toronto, and San Francisco during the 1980s; however, there is little current data on propylhexedrine abuse because most national US databases on drug abuse do not include propylhexedrine.

What are the street names for Propylhexedrine?

The street names for the propylhexedrine extract include Bathtub Crystal, Crystal, and Bathtub Crank.

Propylhexedrine is a potent α – adrenergic sympathomimetic agent, which is a “stimulant of last resort”   for abusers when more desirable stimulants are unavailable.

Habitual use of these inhalers involves the daily use of the contents of 2 to 11 inhalers. Following the disassembly of the inhaler, the cotton pledget is soaked in muriatic (hydrochloric) acid to remove the propylhexedrine.  Heating of this extract produces a brown residue that subsequently is redissolved in water and injected.

Depending on the purity of the process, the resultant solution contains a variety of impurities including polymeric material, ﬁne ﬁbers, methanol, and lavender oil. Some patients with previous amphetamine experience consider the euphoria induced by the IV injection of Benzedrex extracts, 15 mg of methamphetamine, and 75 mg of phenmetrazine similar. Benzedrex abuse is commonly associated with polydrug abuse and homosexual activities. Euphoria apparently does not result from inhalation.

Propylhexedrine is a  drug, so the chronic use can be extremely addictive with a high potential for abuse. This drug is also capable of causing psychological dependence among certain users. Once addiction is developed, withdrawal effects and cravings may occur if an abuser suddenly stops the usage.

Tolerance to the effects of propylhexedrine likely occurs as with amphetamine. It rapidly develops with prolonged and repeated use. In that manner, the abuser has to administer increasingly large doses to achieve the same effects.

Therefore, it takes up to 3 – 7 days for the tolerance to be reduced to half and 1 – 2 weeks to be back at baseline (in the absence of further consumption). Additionally, propylhexedrine presents cross-tolerance with all dopaminergic stimulants, meaning that after the consumption of propylhexedrine all stimulants will have a reduced effect. 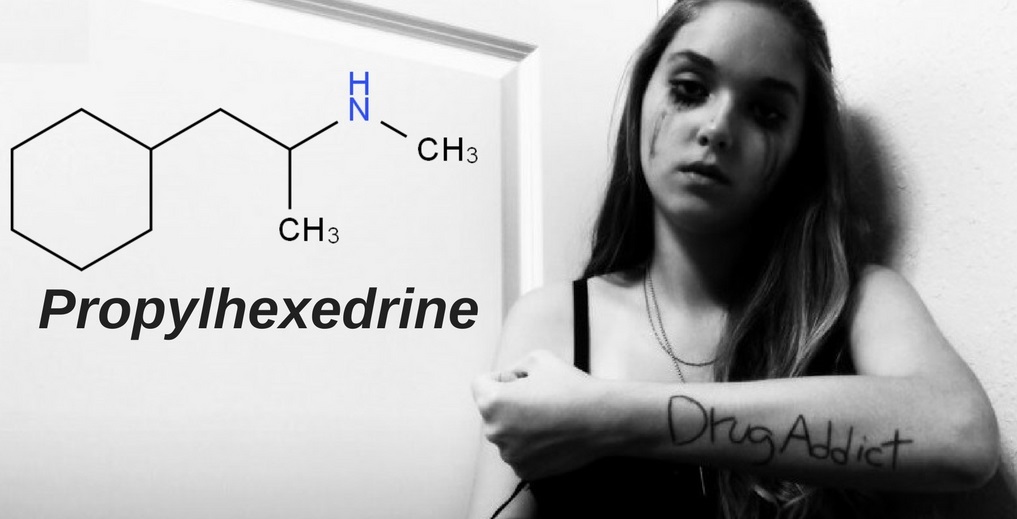 Like with methamphetamine and amphetamine, the evidence on effective treatments for dependence and abuse is limited. Fluoxetine and imipramine appear to have some limited benefits in treating propylhexedrine’s abuse and addiction.

It is known that in highly dependent methamphetamine and amphetamine abusers, “when chronic heavy abusers abruptly stop with methamphetamine use, many report a time-limited withdrawal syndrome that usually occurs within 24 hours of their last dose”.Withdrawal symptoms in high-dose and chronic users are often, occurring in up to 87.6% of cases, and persist for 3-4 weeks with a marked “crash” phase occurring during the first week.

Propylhexedrine penetrates the blood-brain barrier rapidly. In rodent studies, this drug has a large volume of distribution (V d = 19.3   L/kg) after IV administration.

The ingestion of a hot water extract of a cotton pledget containing 250 mg propylhexedrine produced anxiety, agitation, tremors, nausea, and diaphoresis that resolved without sequelae 4 hours after ingestion.  Ingestion of an estimated 375 mg propylhexedrine may cause tremor, muscle spasticity, tachycardia, and insomnia that resolved without sequelae.

Propylhexedrine cognitive effects can be broken down into several components which progressively intensify proportional to dosage. The general head space of propylhexedrine is described by many as one of moderate to extreme mental stimulation, increased focus, and powerful euphoria.

Negative adverse effects are usually mild at low to moderate dosages, they might become very likely to manifest themselves with higher amounts or extended usage. This particularly holds true during the offset of the experience.

Propylhexedrine is usually considered as extremely energetic and stimulating agent and these effects are extremely similar to that of amphetamine or methamphetamine, and stronger than that of caffeine, modafinil, and methylphenidate. Stimulating effects most commonly encourage physical activities such as dancing, socializing, running, or cleaning.

The particular way of stimulation can be described as pressing or forced and is noticeably more adrenergic and tense on the body. Therefore, at higher dosages, it may become difficult or impossible to keep still as jaw clenching, involuntarily bodily shakes and vibrations become present, resulting in the extreme shaking of the entire body, unsteadiness of the hands, and a general lack of motor control.

The effects which occur during the offset of a stimulant experience generally feel negative and uncomfortable in comparison to the effects which occurred during its peak. This is often referred to as a “comedown” and occurs because of neurotransmitter depletion. Its effects commonly include:

Similarly to the amphetamine or methamphetamine, the visual effects of propylhexedrine are usually less consistent and are only mildly noticeable at higher dosages. They are somewhat comparable to the visual effects produced by deliriants and are generally more frequent in darker areas.

Propylhexedrine side effects and toxicity

Propylhexedrine is a potent local vasoconstrictor with substantially less (i.e.,  < 10%) CNS stimulating effect compared with dextroamphetamine sulfate. The acute toxicity of propylhexedrine is an exacerbation of pharmacologic effects of this drug. The psychoactive effects of these compounds result from indirect agonist actions that cause the displacement of catecholamines from binding sites in the storage vesicles.

At least in part, the central effects of propylhexedrine result from alterations in the neurotransmitters, dopamine, and norepinephrine, because of the close structural resemblance of amphetamine compounds to these neurotransmitters. Increasing the synaptic concentration of these neurotransmitters either by direct release from storage vesicles or by inhibition of reuptake is the most likely mechanism of toxicity.

Similarly to methamphetamine, propylhexedrine abuse can also result in a stimulant-induced psychotic state that may present with a variety of symptoms including: paranoia, delusions, hallucinations, though likely to a lesser degree.

A case report associated the development of an acute paranoid psychosis with the daily chewing of 10 – 12 propylhexedrine inhalers by 2 amphetamine abusers. The psychosis in both of these patients resolved after the cessation of drug use. Initially, the propylhexedrine abuser can experience a headache, nausea, and double vision followed by euphoria that lasts several hours.

Case reports associate deterioration of chronic paranoid schizophrenia with the chewing of propylhexedrine decongestant inhalants as manifest by the onset of acute delusional mood and paranoid delusions. Other factors (sleep deprivation, predrug personality, idiosyncratic reactions) contribute to the development of the toxic psychosis. Homicidal and suicidal ideations may occur during drug-induced psychosis.

Propylhexedrine effects usually last from 4-10 hours. The onset of action is after 10-30 minutes. The strongest effects can be expected after 2-5 hours. After effects can last 2-12 hours.

Challenges associated with inadequate chromatographic resolution or coelution of propylhexedrine with methamphetamine can be resolved by the use of selective ion monitoring (SIM) mode in the mass spectrometer.

High performance liquid chromatography/atmospheric pressure chemical ionization/mass spectrometry does not require preanalytical derivatization necessary for gas chromatographic analysis. This method allows the separation of sympathomimetic amines including propylhexedrine with limits of detection in the range of 0.001 – 0.005 mg/L.

Propylhexedrine legal status in the US

Propylhexedrine is a legal OTC drug. It is designed not to be recreationally used unless the user decides to bypass the manufacturer’s intended design with which it was granted approval to market as a nasal decongestant. The simple consumption of this substance is not technically considered illegal.

Does Propylhexedrine show up on standard drug tests?

Since it is structurally related to metamphetmaine and amphetamines drugs, it can be expected to show up on commercial drug tests.

Most patients tolerate sinus tachycardia without pharmacologic intervention unless the tachycardia results from right-sided heart failure. Both hypertension and tachycardia often respond to IV benzodiazepines (Adult: lorazepam 2 mg or diazepam 5   mg IV bolus titrated to effect). Core temperatures should be measured in any agitated patient.

Patients with suspected myocardial ischemia should be managed according to the usual guidelines for myocardial ischemia including aspirin, antiplatelet agents, thrombolytics, primary percutaneous coronary intervention, and blood pressure control as needed. Hypotension may respond to ﬂuid challenges, but often a vasopressor is needed.

Shock is a poor prognostic sign that indicates the need for monitoring of cardiac output to determine the most efﬁcacious combination of ﬂuid and vasopressors. There are no speciﬁc antidotes for propylhexedrine intoxication or efﬁcacious methods to enhance the elimination of propylhexedrine.

Peripheral vascular complications of IV propylhexedrine abuse include local ischemia with necrosis of the digits requiring amputation, cellulitis, sterile abscess, and a fatal abscess in the neck after an attempted central venous injection of an aqueous extract of propylhexedrine – containing inhalers.

Incidental injection of the propylhexedrine extract into a peripheral artery caused local vasoconstriction, inﬂammation, infection, and necrosis manifest by intense pain, marked edema, blanching of the extremity, and loss of distal arterial pulses.

A case report of a 22 year old man associated the development of pulmonary edema, hypotension, anterior myocardial infarction on electrocardiogram (ECG), accelerated junctional rhythm, and pericardial effusion with the ingestion of 250  mg of propylhexedrine obtained from a Benzedrex inhaler several hours prior to the onset of symptoms. The patient recovered from intensive cardiorespiratory support. There was no cardiac angiography or echocardiography.

Pulmonary edema is a common ﬁnding among habitual IV propylhexedrine abusers presenting to emergency departments with dyspnea and cardiovascular instability; cor pulmonale can develop in these patients.  Case reports associated the IV use of propylhexedrine extracts with the development of brainstem dysfunction including transient diplopia, right – internuclear ophthalmoplegia, and focal paralysis of the tongue

Propylhexedrine interactions with other drugs

If combined with other drugs, propylhexedrine may become life-threatening. Although, certain combinations may be safe in low doses of each but still increase the potential risk of death. Propylhexedrine should be avoided in combination with following drugs:

“What is it like to take prolintane?”
“Is Soframycin an antibiotic? What is the use of Soframycin?